I’ll never forget 2005. My exhaustion was like nothing I had felt before. I was chief meteorologist of Telemundo 51 in Miami, a tropically-aware city where any disturbance in the Atlantic basin – even when it’s 3,000 miles away – is news.

That hyperactive hurricane season yielded 28 tropical storms, including infamous Katrina as well as the last major hurricane to strike the United States – Wilma. Both of those hurricanes made landfall in South Florida. I had to help prepare my family, guide an audience through the threats, and then deal with all the difficulties of the aftermaths. Mother Nature didn’t care, though. Even after Wilma, another half-dozen new storms formed. All of those were named using the Greek alphabet (Alpha through Zeta) because the normal list of names had run out. By the end of the season I was mentally drained, and even felt a degree of physical exhaustion.

Many more active seasons followed. Fifteen or more tropical storms formed in 2007, 2008, 2010, 2011, and 2012, which included another infamous system named Sandy. Since then, we’ve seen the number of tropical cyclones, especially the number of hurricanes, diminish considerably. For example, after 2012’s 10 hurricanes, 2013 only yielded two; 2014’s totals were eight storms and six hurricanes. So far in 2015 we’ve had seven tropical storms and two hurricanes (with a strong El Niño).

Earlier this month, colleagues from Colorado State University (CSU), led by Dr. Phil Klotzbach, proposed that the most recent cycle of hurricane hyperactivity in the Atlantic might have come to an end. The natural cycle of Atlantic tropical activity is controlled by the salinity of the water in the North Atlantic. Salty water is heavier and sinks more rapidly, which accelerates a conveyor belt of ocean currents known as the thermohaline circulation (THC).

When this worldwide circulation is moving a bit faster, warm (less dense) water remains near the surface and is heated by the sun. This results in a period of warmer than normal sea surface temperatures in the main tropical cyclone development region (MDR) of the Atlantic basin between Africa and the Caribbean, which leads to a higher number of storms and hurricanes. Each period of warmer water in the MDR tends to last 25 years, followed by another 25 years of cooler sea surface temperatures. But, this being a natural process, the cycle doesn’t always last exactly two and a half decades. Some cycles can be shorter, some longer.

Klotzbach and the CSU team have observed more fresh (less salty) water in the North Atlantic near Greenland in recent years. In addition, the number and intensity of storms is decreasing. The amount of wind energy as calculated by the Accumulated Cyclone Energy (ACE) index has dropped considerably since 2012, and contrasts sharply with that observed in the 1995-2012 active period. 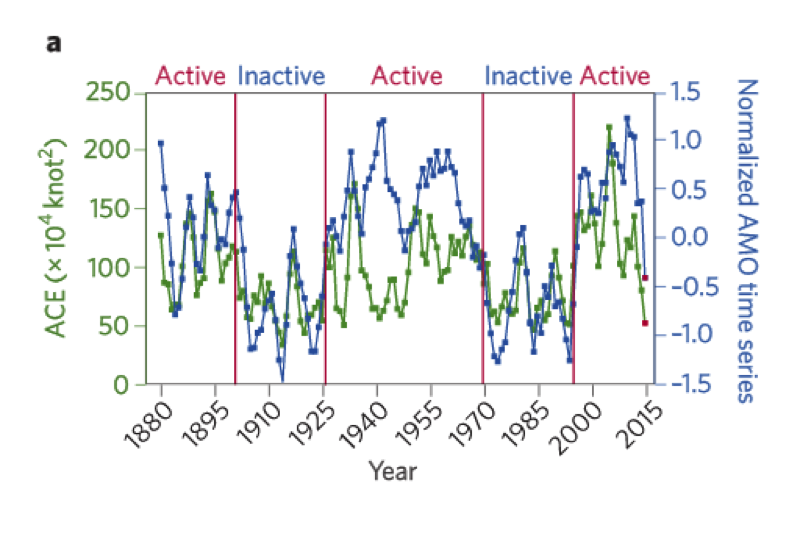 So, can I thank my lucky stars and look forward to 20 or 30 years of relative inactivity in the Atlantic? Not so fast! Another prominent hurricane researcher – Kerry Emanuel from MIT – has challenged Klotzbach because he doesn’t believe in the connection between ocean temperature and salinity. Emanuel thinks that quiet decades in the 1970’s and 1980’s were connected to pollution in the atmosphere, which cut down on solar radiation and kept the ocean surface cooler. The air is much cleaner nowadays (believe it or not), and therefore more solar radiation is warming the sea surface.

Either way, I’m always reminded that it only takes one hurricane to cause ruin. Regardless of how active or inactive the next few years are, Miamians will always have to be prepared for hurricanes. Regardless of where you are, preparedness is everyone’s responsibility.